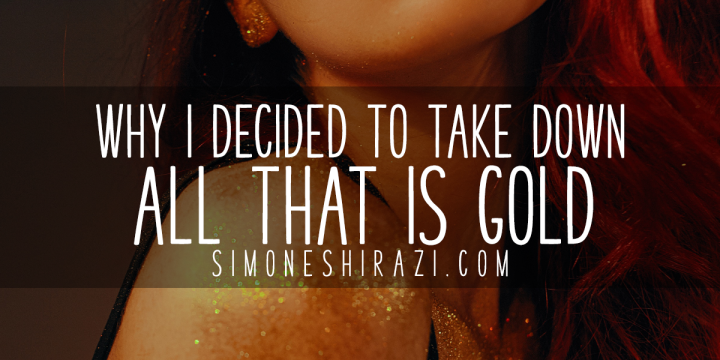 At the end of January, I’m going to be taking down a story of mine from Wattpad that has been posted there since 2015.

That story is All That is Gold, a fun, messy, satirical take on a high school hierarchy that used to bring me such joy. These days, though? No joy to be found, not an ounce in sight. And if I’ve learned anything from the lovely Marie Kondo, it’s to get rid of the things that don’t bring you joy.

It makes me really sad that I can’t feel joyful about that story anymore. Was it ever a favorite of mine? Goodness, no! But I loved the twists and turns, the character development and regression, and the commentary on our capitalist society. It was fun!! It was trashy!! It was a good time!!

And there are so many people out there who feel the same way about it. There are people who love that story and call it one of their favorites. I can’t possibly tell you just how much that means to me. I will always cherish the people who have been kind to me over the years and have shown me so much love. They’re the ones who make braving this scary internet world worth it.

But there’s definitely a lot of bad that comes with the good, and at this point, after five years, the bad has beaten me down. It’s stolen my joy, and the only way I can think of to get it back is to take down this story.

Plenty of people have asked me to explain why I’m planning to take it down, so let me share with you, point by point, why that’s going to be happening and what I’ve faced over the years.

Nothing is ever wholly original. Nothing.

Okay, we got that out of the way? Great!

I’ve talked so much about plagiarism here on this blog and literally everywhere else I exist on the internet that there’s really nothing left I can say. I’ve lost track of all the times I’ve been plagiarized word for word, but the most insidious of it all is when people copy from you in such a way that you can’t do anything about it.

They make things just dissimilar enough that there are no channels (other than asking them to change things) that can stop them. It’s awful. You recognize your story within their words, recognize your characters, recognize yourself… and yet nothing can be done. It sucks.

ATG has been plagiarized and copied so many times, possibly even more than anything else I’ve written. It’s all too often that I come upon (or am sent links to by friendly readers) stories that ring far too reminiscent of ATG. Some days I’m almost tempted to add them to a reading list just to show people how many of them exist.

Some people might argue, “Well, if they’ve already been copying it, why not just leave it up??” I understand that point of view. The damage is already done, after all. But, for me, there’s no point in leaving it up for it just to happen even more. I’m over it.

I will never understand people who feel the need to a) brag in the comments that they  know what’s about to happen in that story and subsequently tell others about it before those people can even read it, or b) compare and reference other stories that have nothing to do with the story they’re reading, except for a character’s first or last name and a phrase commonly found in the English language.

The first example above falls under the category of spoilers. These (as the name implies) spoil the events of the story for people who haven’t read it yet. I commonly have rereaders spoiling my story in the comments of my own stories and in comments of other stories on Wattpad.

These people ruin the experience for first time readers. Those first time readers will innocently open the comments section and bam, there’s a spoiler that they never asked for. I’ve had this happen to me so many times that I pretty much don’t open the comments when I’m reading anymore. I don’t want my reading experience ruined, and I don’t want it ruined for my readers either.

But what gets me the most is when I come upon spoilers for my stories on someone else’s story. I’m usually tagged in comment threads (aka my username is mentioned) which sends me a notification. So I end up seeing, candidly, what people thought of my story (and sometimes what they think of me as a person, which is usually never very nice lol). I don’t care if they didn’t like the story, it’s absolutely their opinion and I respect that, but what I don’t like to see is them laying out every plot point and twist for anyone to see. The comments section on someone else’s story—unless it is literally a book meant for story reviews—is not the place for you to be discussing the spoilery details of my story.

It’s just… I’d say infuriating, but at this point, it’s just another thing to throw in the f*ck it bucket.

I feel like the second example, references, ties in a little bit to what I mentioned about spoilers, because those people are talking about someone else’s story on my story.

When it comes to references, I’m not the kind of writer who wants to see thousands of comments that have nothing to do with my story in my comments. I don’t think it’s too big of an ask to want people to talk about my story on my story.

I want to be able to use common phrases that exist in the English language—like “chauvinist pig” and “meet me in the parking lot”—and use common names—like Sam and Karim—without getting comments screaming about another story that has nothing to do with me. It’s even more irritating when my story existed before those stories they’re referencing even came about. (As a reminder, I began ATG in 2009)

I know some people think these things are nothing and I shouldn’t be so worked up over them. But you try over the span of five very long years, in combination with other things (see the next point on “People Who Can’t Be Decent Human Beings”), putting up with these comments every. single. day. Usually several times a day.

It gets to you. It wears you down. Drip by drip, the rock erodes away.

Part of me is just like, “Hey, it’s the internet, it’s full of crappy people.” But at the same time, I know I don’t have to put up with that. I know I can simply remove myself (or certain content) to prevent that from continuing.

All of that culminates in comments and PMs (on via various social media, not just Wattpad) that no one should ever have to read. I’m not even surprised by most of it anymore. I’m just… disappointed. And I’m tired.

And it’s just not worth it. Which brings me to my next point…

I’m Not Getting Paid Anymore

It’s easier to tolerate things that make you miserable when you’re at least getting paid for it. Sound crappy? I know. But welcome to the world of the working, folks!

Until it ended in December 2019, I was a member of the Wattpad Futures program, where select writers were able to earn money from ads placed between chapters of their stories. The program was essentially deemed a failure and shut down after a couple years, and I can somewhat understand why. Unless you received a lot of traffic on your stories, you weren’t going to make much money. I know of certain writers who were part of the program since the beginning and hit the threshold for payment only a handful of times. Some people never hit it.

I was not one of those people.

For me, the program was pretty successful. Every quarter, I hit and exceeded the payout threshold. Of course, some quarters were more profitable than others, but I always got paid. It gave me another reason to keep my old stories that I really didn’t care for anymore up on Wattpad—the first reason being that a lot of people actually liked this story.

I was a fan of this program because it enabled me to keep my content available for free on Wattpad and still receive monetary compensation for my effort. It had its flaws, sure, but this was what I wanted, especially for All That is Gold. I didn’t want to charge people for a story that a) had never been edited, b) was a wild NaNoWriMo journey, and c) was just a general hot mess. When they rolled out Paid Stories, I could have put ATG behind a paywall, but there was no way I was going to ask people to spend money on it in its current form. I was also not going to edit and/or rewrite it; why spend my time working on that when I have so many other stories/ideas I love more and want to work on?

It just didn’t make sense for me.

But now, without having that one last incentive that allowed me to breathe through the annoyance and stress, I’m calling it quits.

Goodbye, All That is Gold. You had a good run.

Well, that’s what I’ve faced in the five years since I started posting this story.

Don’t get me wrong, there have been so many wonderful things too, and I just want to hug everyone who has ever said something nice or helpful to me about the story. Those people are all gems and I adore them.

But like I said before, sometimes the bad outweighs the good, and I need to take some time to rebalance the scales.

A lot of people have asked what I plan to do with the story now that I’m taking it down. My answer? I… don’t really know. For right now, I just want to escape from it for a while.

That said, if it does ever return, it won’t be to Wattpad. It’ll most likely be to Radish Fiction, and it’ll be completely overhauled. I’m talking about edits/rewrites and new content. Maybe an extra novella about Quinn. Maybe I’ll continue the fourth book in the series I started writing ages ago.

But for the time being, it’s going to sit on my hard drive and relax. It deserves a break. And so do I.

Thank you to everyone who has supported both me and All That is Gold over the years. I cherish you. You’re the reason this story stayed on Wattpad for even this long. And I hope that whatever new content I create in the future, you’ll enjoy that too.

Take care of yourselves.

EDIT AS OF MAY 1, 2021 – Well… I brought the story back. Here’s all the information, and you can read it exclusively on Radish.