If you’ve found your way here, you probably know me from Wattpad or Radish Fiction where I write Teen Fiction/Young Adult and Romance novels. Or maybe you know me back from the FictionPress or PlagiarismHaven days. But no matter how you stumbled upon this blog, I’m glad you’re here!

Anyway, I figured I might as well take a moment to introduce myself and tell the tale of how I ended up here.

So, hi! I’m Simone! I’m an avid reader and writer who has been on the internet for… a long time. Way too long. It’s amazing I’m still here. Why am I still here?

I started writing online back when Quizilla was still a thing and I was too young to be on the internet. Anybody out there remember Quizilla? I wrote Harry Potter fanfiction and it was bad. But even if it sucked, I had the time of my life writing it.

It was around 2007 when I realized I was interested in writing original fiction. I moved to FictionPress and started posting under the username “simonexsays”, kicking everything off with a little story called Once Upon a One Night Stand.

Unfortunately, due to rampant plagiarism, I didn’t stay on FP for very long. I’d made a few friends during that time and discovered they had also been plagiarized, but despite that blow, we all still wanted to keep sharing our work online. So we banded together and created a private LiveJournal community called Plagiarism Haven.

The PH days were some of the best of my life. Was it a lot of work running a 2,000+ user community? Uh, yeah. But I loved it. We were a little creative family and I was able to explore who I was becoming as a writer in a safe space.

But, as many things go, PH shut down in 2013. Most of us were either busy with school or working full-time jobs, so writing began to fall by the wayside. Running the community became a bit too much to handle and we mutually decided to bring the PH chapter to a close in January 2013.

I hadn’t written anything since mid-2012 anyway. And I didn’t write another word until May 2014.

Two years. That’s how long I stopped writing. Sometimes I look back and think, “how did I not write a single word for two whole years?” But then I remember that those two years were some of the best (and most stressful) years of my life. I was too busy focusing on my own life instead of my fictional characters.

But by the end of 2014, I was starting to miss sharing my work with others. I’d essentially grown up posting my work chapter-by-chapter on various sites, and the lack of feedback/interaction was starting to make writing feel lonely, which it had never been for me before.

Enter Wattpad. I only knew of the site’s existence because someone had posted a plagiarized version of Once Upon a One Night Stand there (which I will from now on refer to as “OUAONS”). I was wary of the site for sure, but I figured it was my best bet if I wanted to share my work again.

So in January 2015, I started posting OUAONS under the username “simonesaidwhat”.

I wouldn’t say it was an instant success, but the story definitely took off. By June, I had posted all the chapters and was sitting at a lofty #3 on the Teen Fiction Hot List, a ranking system that Wattpad has since done away with (and needs to bring back, tbh!). I was amazed that this little story that I started writing at 13 had achieved such a feat.

As of today, very nearly the end of 2018, OUAONS sits at 21 million views and I have nearly 91k followers. Honestly, I still can’t quite believe it, but I’m thankful for every single one of those people who gave me and my stories a chance. 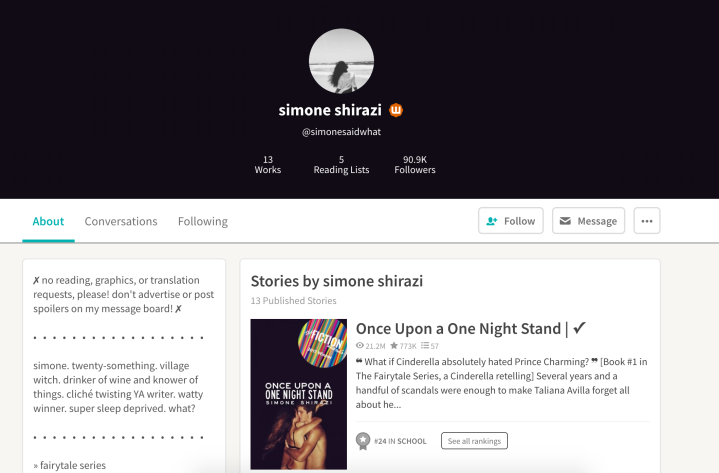 That little orange icon beside my name indicates that I’m a Wattpad Star, which is a pretty big honor. It’s always encouraging to know that people believe in me and my work.

Other than OUAONS, I’ve written and posted several other stories to Wattpad and Radish Fiction, which is another serialized fiction app. I’m happy to have found a home on both sites.

With this blog, I’ll definitely be keeping you all up to date on my writing journey, as well as my general life. If that’s something you’re interested in, stick around! I promise we’ll have some fun.

Now, here are 5 facts about yours truly!

I can’t wait to share more with you all! But for now, take care ❤️